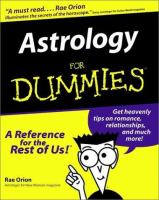 Did you know that Sir Isaac Newton, inventor of calculus, and discoverer of the universal laws of gravity and thermodynamics ,was interested in astrology? Or that, in his day, the seventeenth century astronomer, Johannes Kepler, was more famous for the uncanny accuracy of his astrological predictions than for his three laws of planetary motion? Julius Caesar, Queen Elizabeth I, Napoleon, George Washington, Thomas Jefferson, Ben Franklin, Carl Jung...the list of greats who followed astrology is a very long one. Like you, those distinguished women and men sensed that the stars play an important role in shaping our characters and our destinies.

Astrology For Dummies is a fun, easy intro to astrology's mysteries. Rae Orion, author of New Woman magazine's monthly astrology column, offers a shortcut through the jargon and tells you how to:

Understand how the planets affect you Figure out your horoscope Interpret sun signs, moon signs, rising signs, and more Know what your horoscope means for romance, work, and your future Apply astrology to everyday decisions Take advantage of astrology software and Web sites

Astrology goes much deeper than the sun signs covered in your daily paper, and Astrology For Dummies is your star chart for navigating its many depths, twists, and turns. You'll explore the significance of the Sun, Moon, planets, rising sign, and the twelve houses. And in no time you'll:

Cast your birth chart and look up each sign in it by sign and house Unearth basic patterns that characterize your chart as a whole Analyze the geometrical relationships linking your planets Interpret with voids, empty houses, and other manifestations of zero Recognize how current planetary placements, or transits , influence your life Understand retrograde planets and why they're not always bad Use astrology in everyday life and use the Moon to your utmost advantage

For millennia, people have used astrology to help them unlock the mysteries of their psyches, unleash their potentials, make the right matches, and even take an occasional peek into the future. Now let Astrology For Dummies show you how to make it work for you.

There are no comments for this title yet.

There are no summaries for this title yet.

There are no quotes for this title yet.

Loading...
No similar edition of this title was found at WCL.

Try searching for Astrology for Dummies to see if WCL owns related versions of the work.