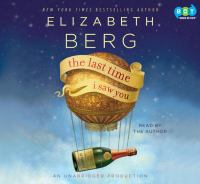 The Last Time I Saw You

To each of the men and women in The Last Time I Saw You, this reunion means something different-a last opportunity to say something long left unsaid, an escape from the bleaker realities of everyday life, a means to save a marriage on the rocks, or an opportunity to bond with a slightly estranged daughter, if only over what her mother should wear. As the onetime classmates meet up over the course of a weekend, they discover things that will irrevocably affect the rest of their lives. For newly divorced Dorothy Shauman, the reunion brings with it the possibility of finally attracting the attention of the class heartthrob, Pete Decker. For the ever self-reliant, ever left-out Mary Alice Mayhew, it's a chance to reexamine a painful past. For Lester Heseenpfeffer, a veterinarian and widower, it is the hope of talking shop with a fellow vet-or at least that's what he tells himself. For Candy Armstrong, the class beauty, it's the hope of finding friendship before it is too late. As Dorothy, Mary Alice, Lester, Candy, and the other classmates converge for the reunion dinner, four decades melt away: Desires and personalities from their youth reemerge, and new discoveries are made. For so much has happened to them all. And so much can still happen.
Publisher: New York : Random House Audio, p2010.
ISBN: 9780307713742
0307713741

Ms. Berg takes on the high school reunion as the backdrop for a motley crew of characters. Rarely have the psyches of the Mean Girls, the Jocks, the Nerds, the Wallflowers or the Nice Kids been so thoroughly explored. Few people have their lives turn out as they envisioned in youth and Ms. Berg’s novel limns in hilarious (and sometimes gruesome) detail just how life rose from, met or fell short of expectations.

It’s a real page turner of a novel as those of us who went through high school (the best/worst years of our lives) eagerly pore over the passages of people who are dreading this experience or looking forward to it. Missed opportunities, second chances, regrets, promises, anxiety, dread and romance bloom or wither as the story winds its way to its hopeful conclusion. Ms. Berg’s prose has an incisive yet light touch; while there are some obvious nasty characters in this book, she refrains from making villains out of anybody.

You’ll find yourself groaning, grimacing, laughing or simply nodding in recognition as you read through this book. Whether you went to your high school reunions or avoided them like the plague, this book is one vicarious insight after another.

Loved this book. It reminded me of my own High School experiences in many ways. I could see myself in one of the characters and the way her life has gone. I do wish however that the character of Lester would have made the connection that he was looking for. That would have to be my only real criticism of the story. But on the other hand, that's also the way life goes..........

Read this book in one nite. Captured me right away. Great read, highly recommended. Loved the storyline and development of characters. Made you think og or own high school days.

This was a depressingly realistic look at high school and aging: teenagers can be mean, marriages unhappy, problems and griefs old and new abound, and we all die in the end. If only a couple of the viewpoint characters had been followed I can see that the plot might have been criticized as too light and romantic, but there were a few too many characters with too many problems for me.

Elizabeth Berg write really entertaining fiction--this book is about a 40th high school re-union. We meet the characters before the event when all their expectations are high. Then the plot moves into the actual event and what happens there. Things don't turn out they way anyone expects, and lessons are learned along the way. The book is not preachy or smarmy in any way. Just a good read.

After Dorothy hangs up, she inspects herself in the mirror again. She’s going to have lunch with her daughter, and Hilly can be very critical. Honest, she calls it, and it is honest, Dorothy supposes, but it’s also barbed-wire critical.

of course he remembers Mary Alice. One of the uncool nerds, like him. Kids used to be pretty mean to her. He remembers a time a group of jocks made catcalls after her as she walked down the hall. He’d wanted to defend her – what was the _point_ in that kind of cruelty? – but hesitated out of fear of being attacked himself. But then he saw that she didn’t seem in need of being defended: she’d held her head high and walked steadily on, seemingly impervious to their taunting. And there that knot of thick-necked boys stood: utterly ignored, suddenly looking sort of foolish.

Imagine if, when they were kids, they’d gone on and on over health concerns, their measles and mumps, their skinned knees and broken wrists and cavities. _Yeah, I was really worried about a staph infection with that skinned knee!_ Or _Broken wrist, man alive, what a problem. I have to write with my left hand! I can’t take a bath! Can’t play volleyball! What will_ happen _to me?_ No. They did not complain when they were kids, with rare exception. They just went on with their temporary ailments, waiting to get right again. They got their casts signed and made it fun!

He’s known men like Candy’s husband seems to be, and the kindest thing he can say about them is that he will never understand them, the way they deny themselves happiness and contentment because of a kind of stinginess and general obstinacy toward their wives, if not a weird sort of hatred. He thinks that such men feel there is a pattern of behavior that must be adhered to during courtship; after that, the onus is on the woman – and the woman alone – to please.

she’s curious about them, too. Who are they now? For that matter, who were they then?

There are no summaries for this title yet.