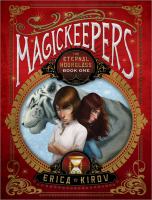 Living in Las Vegas with his unsuccessful father, Nick Rostov learns on his thirteenth birthday that he is descended from a powerful line of Russian Magickeepers on his dead mother's side, and that the equally powerful but evil Shadowkeepers will stop at nothing to get an ancient relic that his grandfather gave him.
Publisher: Naperville, Ill. : Sourcebooks Jabberwocky, c2009.
ISBN: 9781402215018
1402215010
9781402238550

For those who can't get enough Harry Potter, now there is Nick , the magician. Nick has grown up unaware of his heritage as the latest in a long line of Gazers and is suddenly snatched away to the luxurious lair of his true family when he reaches the age of 13. Instantly, there is a whole new world of experience before him.

blue_swan_77 thinks this title is suitable for 10 years and over

Meet Nick Rostov…one day he’s the son of the worst magician in Vegas and the next he’s descended from a long line of Russian Royalty on his dead mother’s side of the family. Oh yeah, he also learns that Damien, the best magician in all of Vegas is really his third cousin and not just some über-talented illusionist but a real magician; think Harry Potter minus the wands and pointy hats…and so is he.
Nick learns the hard way that the family’s enemies, led by the crazed Rasputin, will stop at nothing to gain access to his powers so they can find the eternal hourglass…a device so powerful it can stop time.

If you were Nick what would you do? When you’re a magician in Vegas what else can you do but join the show? Hopefully he’ll live long enough to meet everyone’s expectations.

This is a great start to a promising series.

There are no quotes for this title yet.